SEWAGE WATER DISCHARGED IN THE SENNE AND THE CANAL

Read also: Open Video and Letter 2022 for Brussels minister Alain Maron about the discharges of polluted water into the Senne and the canal

In the future Brussels’ only river, the Senne (Zenne), will be uncovered in the Maximilian park. Together with the extention of the park, it will contribute to the creation of a place where people can feel close to nature and water. It is also a symbolic act to undo the mistakes of the past when the Senne was used as an open sewage and had to be covered. But is the Senne really ready to be exposed in the center of the city? Is it free from sewage water discharges? The answer is no, and far from it. Actually, the Senne is polluted whole year round by sewage water discharges through the sewage system overflows, just like the canal.

0
To the Senne
Previous
Next

Video of sewage water overflow to the canal 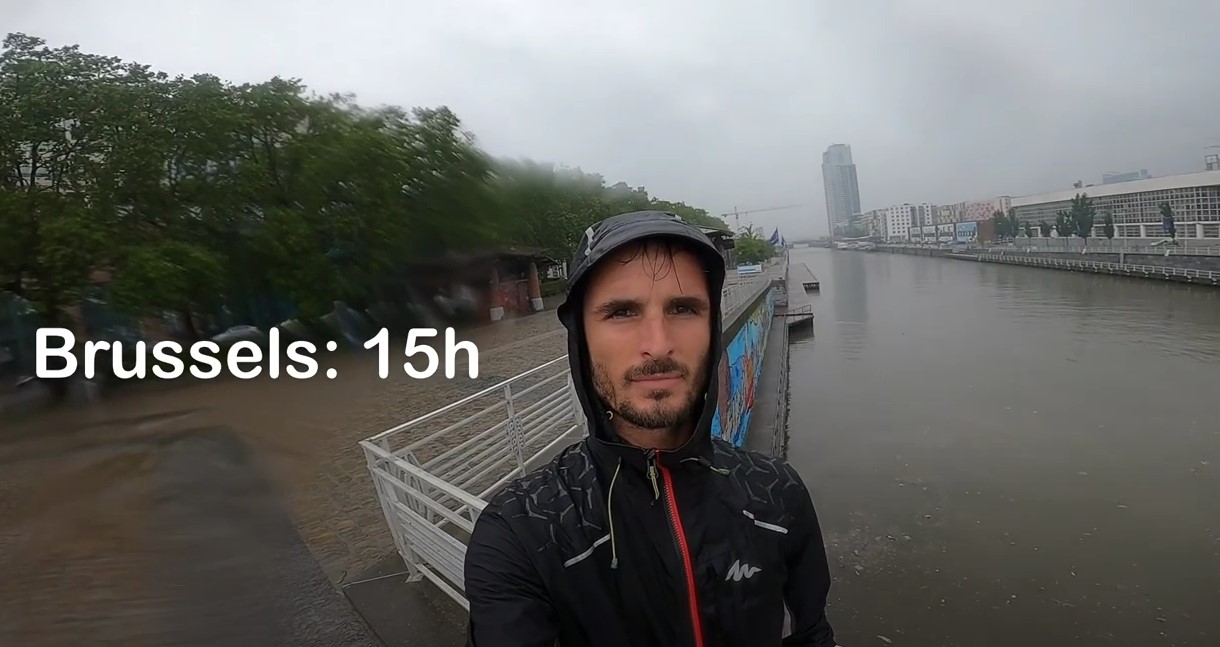 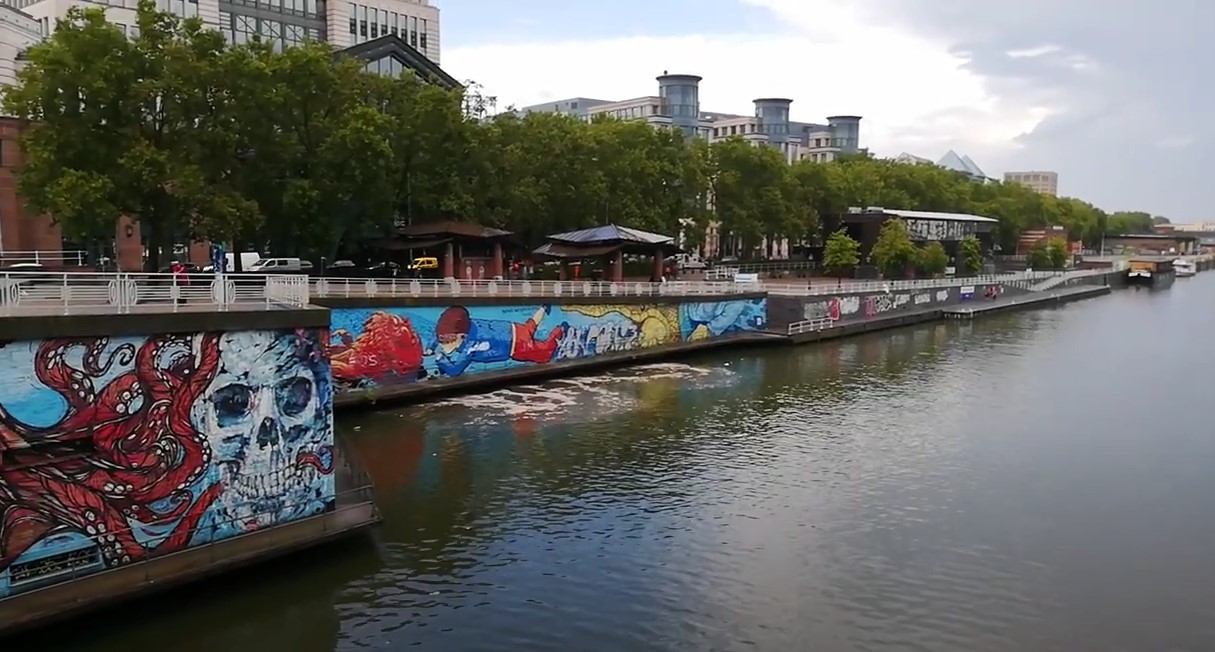 Every sewage system has emergency overflows for heavy rains. To avoid floodings in the city, the excess water is discharged through the overflows into a canal, a river or a storm water bassin. An overflow is allowed to function only a couple of times per year during the most heavy rain events.

In Brussels, there are 81 overflows but 3 of them account for 75% of all sewage water discharged into the Senne and the canal: Sainctelette (Paruck), Molenbeek and Maalbeek. Let us take a closer look to the one at Sainctelette. When it rains, the water flows into the sewers causing the water level to rise. When it reaches a certain point, the excess water is discharged to the Senne through the overflow and a sort of siphon that passes underneath the canal. This siphon is the initial sewage pipe that used to connect the sewage system directly to the Senne prior to the construction of the two sewage water treatment facilities in Brussels in 2000 and 2007. 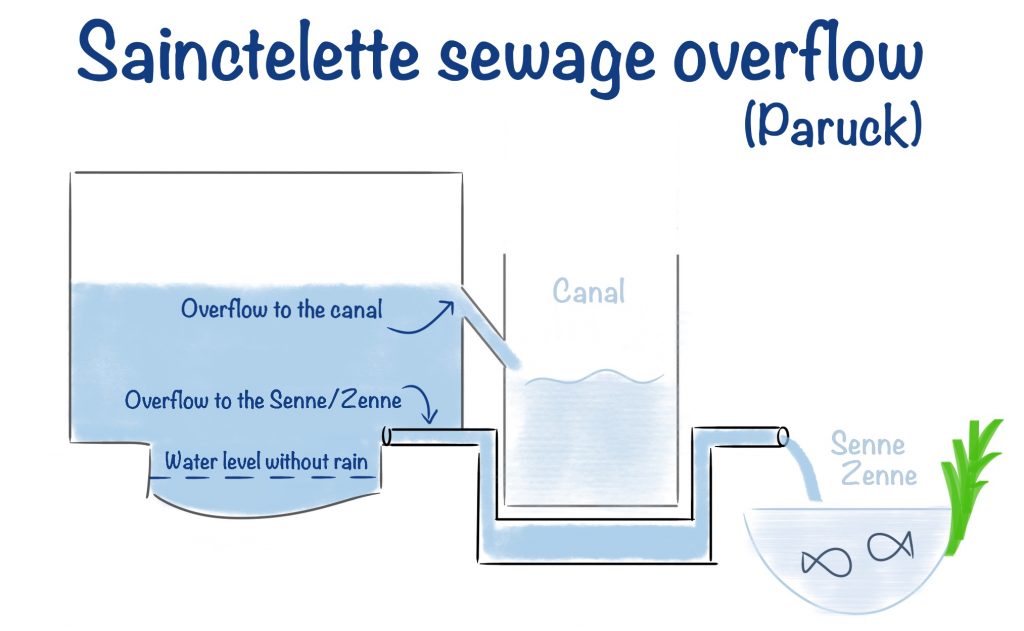 If, despite the first discharge, the water in the collector continues to rise and reaches the level of the second overflow, the water is discharged directly into the canal. And since there is no grid or retention of trash, everything, rats included, ends up in the canal together with the polluted water.

WHAT DOES AN OVERFLOW LOOK LIKE FROM THE INSIDE?

How often do these overflows take place in Brussels? If we look at the Sainctelette overflow, there were 79 overflows to the Senne and 21 to the canal in 2020. These numbers are obtained by counting the number of days that the overflow is activated and discharching a significant amount of water. It is possible that the overflow is activated a couple of times in one day but this is counted as one overflow event. In 2020 polluted water was discharged into the Senne 7 days per month in average whereas the standard used for the construction of new sewers is of maximum 7 days per year. And what happens at the Sainctelette overflow is representative for the other overflows in Brussels. Throughout the whole year, polluted sewage water flows directly into the Senne and the canal during rain events. Overall, the Senne receives a volume of sewage water that is 10 times superior to that of the canal. Sometimes, an overflow event can continue for hours. For example, on 10 and 13 March 2020, sewage water flowed twice for 12 straight hours directly into the Senne (see graph below). 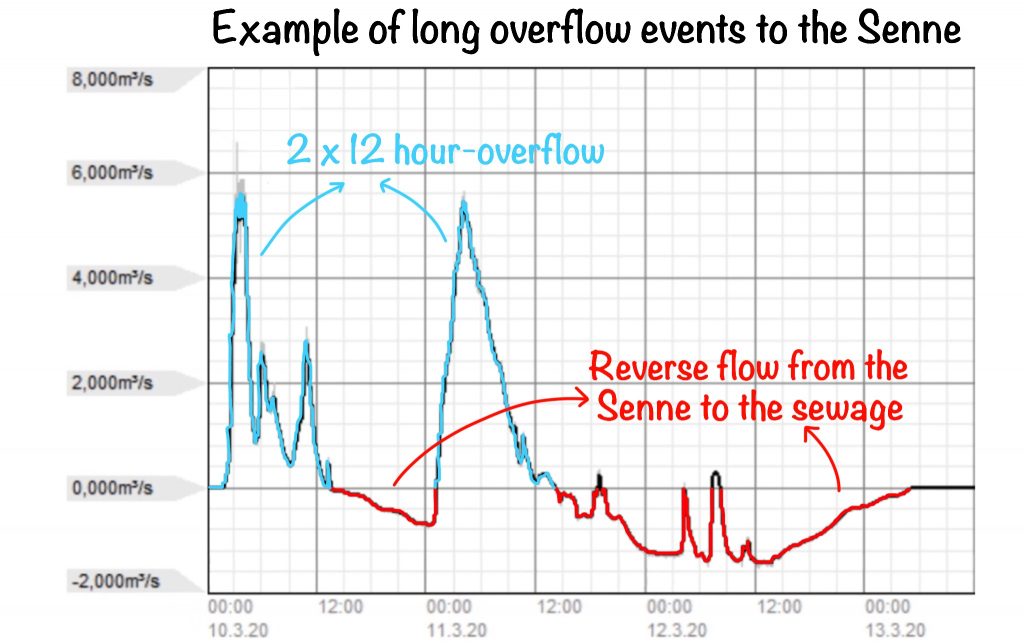 What we can see as well on the same graph is that the flow of the overflow becomes negative twice. This means that water flowed from the Senne into the sewage, generating a kind of short circuit. A non-return valve is needed to prevent this. The pollution in the water is bad for the ecosystem as it causes the oxygen level to drop, among other things, preventing many types of fish and plants to settle in the Senne. Moreover, plastic trash finds its way into the river and finally into the sea. Not to mention that it can also be a source of health issues for people as well.

In the last years, we have seen more news coverage about the improvement of the water quality of the Senne. The fish population has increased, seals swim much further into the Scheldt etc. The reason for this is the construction of the two sewage water treatment facilities in 2000 and 2007. Before that, all the sewage water was directly dumped into the Senne! Can we really be proud about the improvement of the water quality of the Senne? The construction of the two facilities was a very big step for sure but it was just a necessary and logical step for a city, which was taken very late and under pressure of the European Union. Today, 98% of the city is connected to the treatment facilities, but that does not mean that 98% of the water is treated, far from it. Together both facilities treat 125 million m3 of water each year but at least 10 million m3 never reach them and are directly discharged into the Senne and the canal through the overflows. What is more, 6 million m3 of the water that reaches the facilities only goes through the emergency treatment process when it rains where it is only lightly filtered and the trash is removed before it is discharged into the Senne.

It is time to act. If Brussels really wants to introduce more nature in the heart of the city, it is time to respect the nature we already have. The European Water Framework Directive, published in 2000, commits all European Union members to achieve good qualitative and quantitative status of all water bodies by 2027. For Brussels, this applies to the canal, the Senne and the Woluwe. Today, the canal and the Senne suffer from bad water quality and are far from reaching the good chemical and ecological status. How will they ever reach this status if they continuously receive sewage water discharges? Is Brussels planning on asking to postpone the deadline once more in 2027? 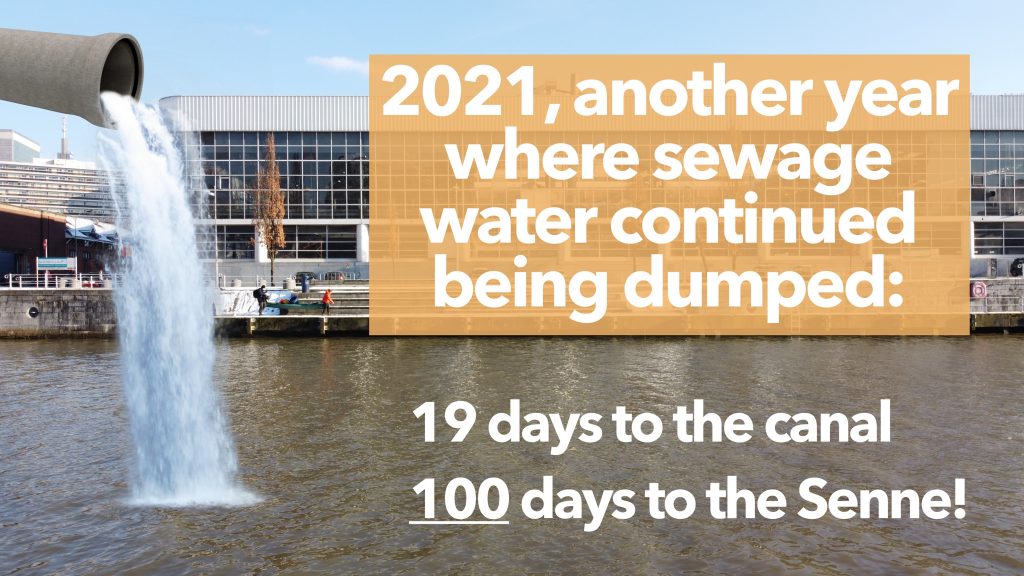 Some cities have a separate sewer system, i.e. sewage and rainwater are divided into two separate pipe systems. Sewage water goes to a water treatment plant but not the rainwater. Thanks to this system, there is no problem of sewage overflow. In Brussels there is a combined sewer system, which means that sewage and rainwater flow in the same pipes towards the water treatment plant. Moreover, some streams such as the Molenbeek and the Maelbeek disappear underground and end up in the sewer system. There is no need to treat water from the streams and rainwater, but it happens anyway since it is mixed with polluted water in the pipes. This leads to a decrease in efficiency of the treatment plants, which function better with a constant flow of concentrated sewage. Since it would be quite impossible to dig trenches in all the streets to install separate rainwater pipes, the solution in Brussels is to prevent the rainwater from flowing to the sewers. The authorities have to redesign the squares, streets and parks to allow rainwater to infiltrate into the ground, to be stored and reused, or to be delayed in its course toward the sewers. Besides, a budget should be available for subsidies to encourage people to place water tanks to collect rainwater from their roofs or to install green roofs whenever possible. Solving this problem calls for a solid investment as well as for a mentality shift and an acknowledgment of the seriousness of the current situation.

The city is currently planning to optimize the use of the Belliard storm water basin to decrease the number of sewage discharges of the Maelbeek overflow. Nowadays, this water bassin is only used to prevent floodings. But, since the volume of the Belliard storm water bassin is quite limited (17.000 m3), this will probably not have a really big impact. The Maelbeek overflow itself has been slightly modified, which has led to a decrease in the number of discharges. For the Molenbeek valley, plans were made to construct a storm water bassin because there is a real risk of flooding but the realisation of these plans seems to be blocked because there is no political will anymore to build such infrastructure. The budget foreseen for the bassin is not currently being used for alternative solutions. For Sainctelette, only small adjustments will be done. These are all limited and cheap adjustments to the existing infrastructure. They have a positive effect but it is by far not sufficient to reach the objectives of the European Water Framework Directive by 2027. A real ambition to reach these objectives is not yet in sight.

If the discharges of these three overflows could be eliminated, we could reduce the amount of sewage water discharges in Brussels by 75% and the efficiency of the treatmant facilities would rise significantly because it would receive less rainwater. This too is a necessary and logical step for a city to take. So what are we waiting for?